What is Plausible Analytics?

Plausible is a fully GDPR compliant website analytics platform, made and hosted in the EU. The script adds less than 1 KB so it’s lightweight, lightning fast, and privacy-focused. 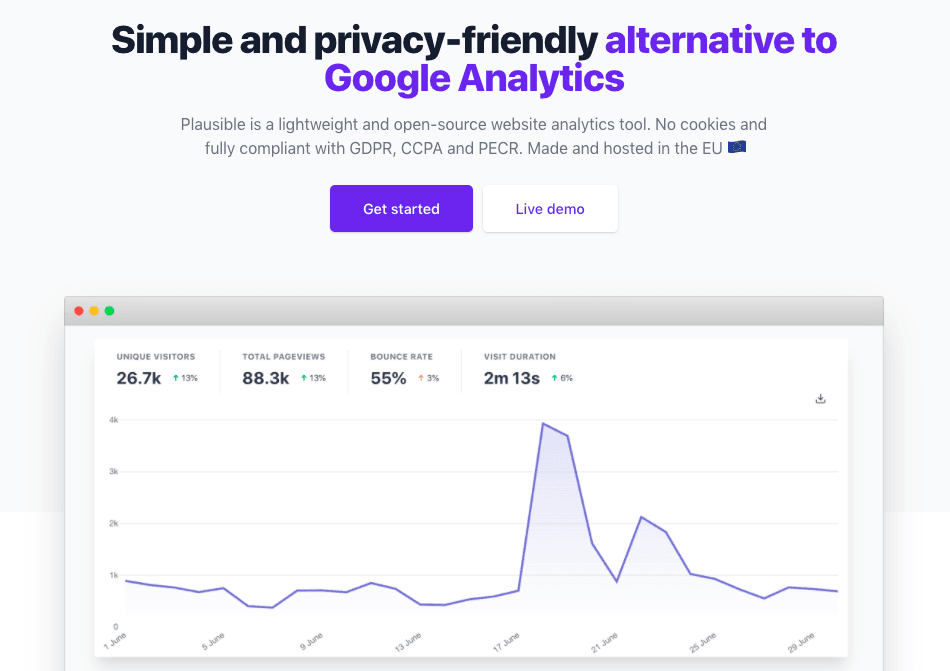 But how does Plausible stand up to Google Analytics?

Why Should You Trust Me?

My job requires me to live and breathe Google Analytics, often abbreviated as just GA. Google Analytics is used by 84% of websites known by W3Techs, and for two good reasons:

But Google Analytics has some major downsides, including that it’s made by the largest digital advertising company in the world. It’s not privacy-focused by default because it places tracking cookies that persist for years.

I was looking for a Google Analytics alternative for this website because I don’t want to use cookies at all, and that’s how I found Plausible.

For the last two weeks I’ve had both the Plausible and the Google Analytics code firing on all pages of my website.

Both tags are placed through Google Tag Manager with the same firing trigger.

I get about 5,000 visitors each month so I wanted to compare the data both tools collect. 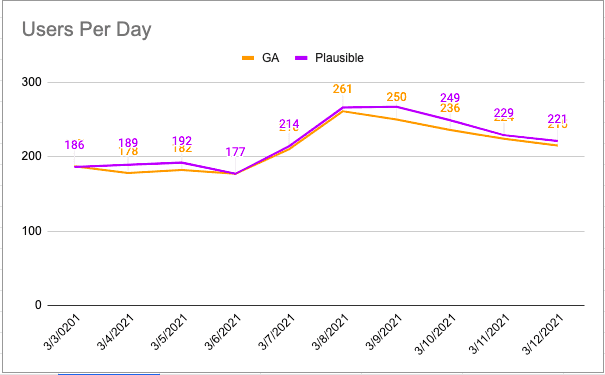 The orange line in the above chart is Google Analytics and the purple line is Plausible.

What could cause that?

It could be because Plausible resets sessions every 24 hours. Because there’s no cookie stored, Plausible has no idea if the same person is coming back multiple days in a row.

The Google Analytics can persist for up to two years, so Google has a more accurate(and invasive) way of measuring return visitors for periods greater than 24 hours.

That’s a strong plus for Plausible if you’re seeking a privacy-first and open source website analytics tool.

Plausible has a great feature overview, but I’ll summarize the points that are most important to me.

I hate having to accept cookies on every website these days. For many companies, having cookies is unavoidable. If you run paid digitial advertising campaigns then you need to place a tracking pixel to tell Google and Facebook when a conversion happens, so they can optimize the bids and traffic for you.

But for small websites like mine, going cookie-free is not only possible(I don’t run paid ads for my personal website), but it should be the standard. I also don’t want to bother with a cookie banner.

Google Analytics has long gotten by by being the default analytics option because it was the only option.

Supporting open source tools is important to me. I believe in the ecosystem even though I’m not a developer.

By making the code visible, and by accepting pull requests, Plausible puts their money where their mouth is. All of their claims around privacy and user tracking can be backed up by referencing the open source code.

The same can’t be said about Google Analytics.

I’m a firm believer in the power of default settings.

Default options have power, and the default for web analytics tools should be cookie-free and GDPR compliance.

It’s possible to configure Google Analytics to anonymize IPs and only to store the most important data, but it’s not the default.

Small website owners don’t have the time, or often the knowledge, to make those adjustments themselves. Someone who owns a local HVAC company is not going to know anything about GDPR or internet privacy.

And they shouldn’t have to.

By defaulting to privacy-first, GDPR compliant options, Plausible makes it easy for anyone to adopt a more progressive analytics solution. 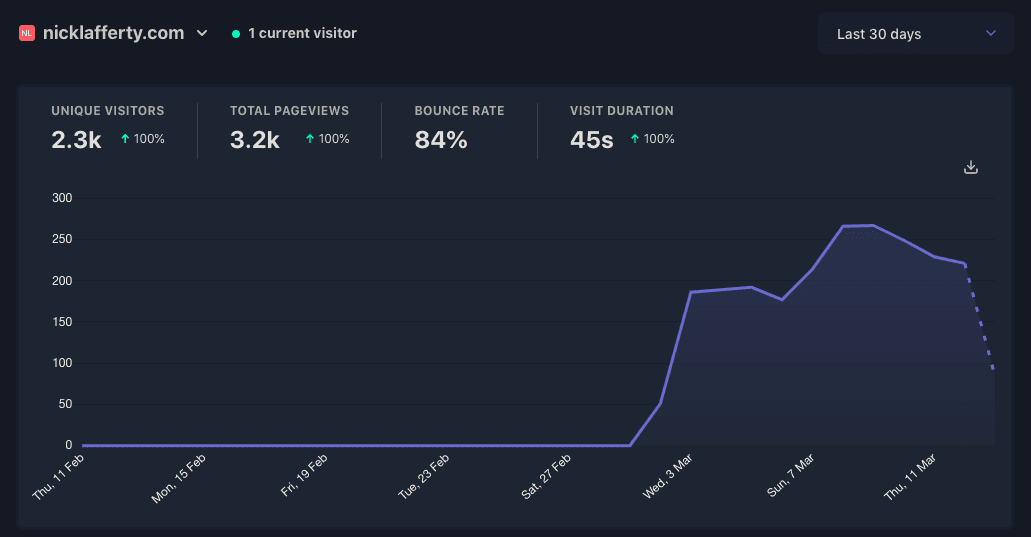 The above chart is from my Plausible dashboard. My favorite plausible feature is that their reports are simple.

All of the Plausible reports and charts fit on a single page.

In contrast, Google Analaytics is complicated and tracks hundreds of different metrics. There are many pages and folders you have to sift through to find the report you want.

There are Google Analytics certifications you can get to prove you know the tool well. Plausible doesn’t need any certifications because of its simplicity.

Here’s how they compare on features and pricing:

Plausible has a free 30 day trial with unlimited page views, but after 30 days you’ll need to pay for it.

The cost is small, starting at $6/month or $4/month paid annually.

It’s really a minimal cost and it supports the two developers. Because they’re not backed by a mega corporation they need to charge, which is totally understandable.

Even if you have 2 million page views a month, Plausible only costs $69/month. 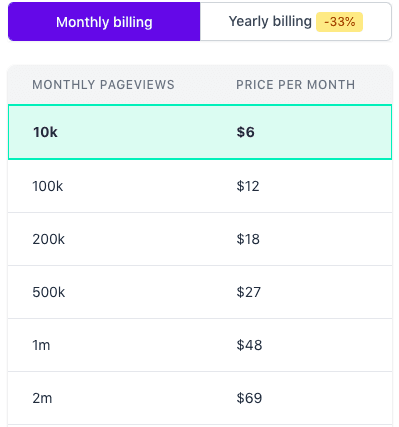 If you want an open source google analytics alternative then Plausible is easily worth the cost.

Formerly Piwik, Matomo is another GA alternative. But it’s more expensive than Plausible: their cheapest plan starts at $29/month for 50,000 users.

Open Web Analytics is a tool I have not personally used, but I immediately distrust it for one reason: their site doesn’t use https. An https website is tablestakes in 2021, so I won’t be testing this tool.

Cloudflare’s web analytics tool also came out of beta recently with another privacy-focused, lightweight Google Analytics alternative. You can use CloudFlare analytics in two ways:

Do You Need Google Analytics?

No. There are several alternatives to Google Analytics these days. If you’re concerned about Google rankings and SEO, Google does not use GA data for their ranking algorithms.

Google Analytics is great if you want a free, widely used web analytics platform. If your goal is to learn digital marketing then you need to know Google Analytics.

But if you’re looking for an analytics tool that respects your users privacy, does not use cookies, and only shows you the most essential data, checkout Plausible.