This post on the best productivity tools was first written in 2020. It’s been updated for 2023 to reflect feature and pricing changes and the addition of Monday and ClickUp .

There are a lot of productivity apps on the market. Notion is one of the most popular and flexible tools. It’s an all-in-one productivity solution and it’s simply one of the best tools I’ve ever used.

Notion is incredibly flexible. It can be a writing repository, task management software, a workout calendar, a database, and so much more. Better yet, you can connect your data in each of those projects to each other, so your workout calendar can reference your journal entries.

But no tool is perfect.

Check out my top Notion alternatives for another perspective on how these tools stack up.

Or browse this list below on top project management tools.

In 2020 Notion updated their free tier to have unlimited blocks, previously you were limited to 1,000. Now you can use as many as you like.

Unlike other tools here, you can create a website with Notion which can help creators use a tool they’re very familiar with to start publishing content on the web.

Here’s a shortlist of some of the best productivity apps, updated for 2021. Click to jump to that section:

Notion describes itself as the all-in-one workspace.

Monday is workplace management tool designed to use with multiple people.

Both can do similar things, but the main difference starts with what part of your life the tools are designed to help with. Notion is flexible and can be used to create anything. Monday is only for work.

Read on to see the Pros and Cons of Monday, a price comparison, and learn why Notion is a great free alternative to Monday. 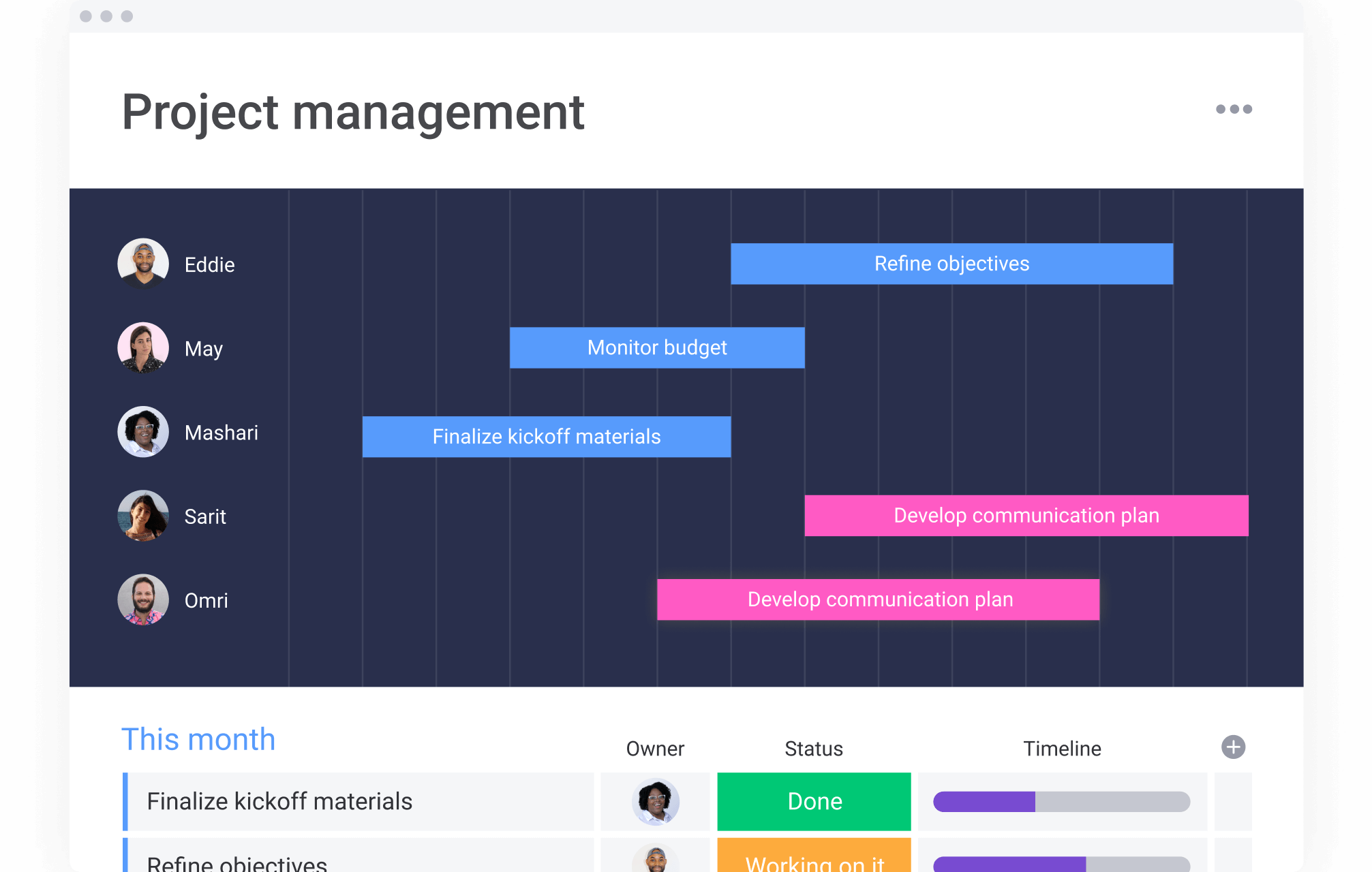 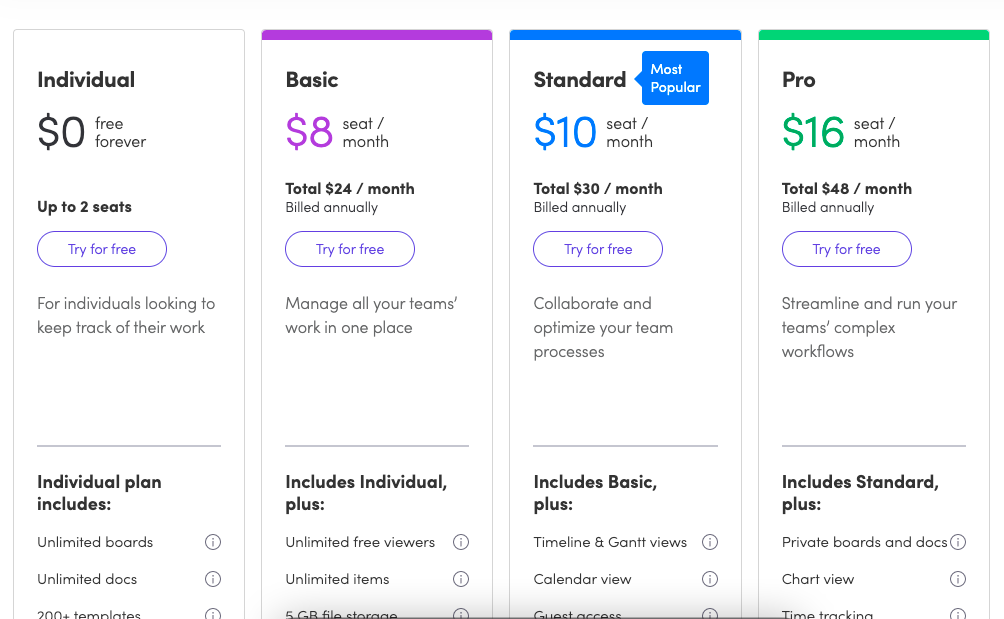 Notion is much cheaper than Monday simply because their pricing begins with only one user.

Monday charges you a minimum of three users when you upgrade to a paid plan.

But, Monday’s free plan is compelling.

It includes unlimited boards, docs, and access to over 200 templates.

You can even invite a second user to your workspace for free.

So unless you really need to use monday with 3 or more people, the free plan can serve your needs.

Monday’s goal as a workplace-focused productivity app is to get you and your colleagues to start using it.

The faster you invite your colleagues, the better the chances of your usage of the product sticks long term.

While Notion’s Personal plan starts at $5/month, you can easily get by with their Free tier for a long time.

Here’s some of the cool things you can do with Notion:

Because Notion’s free trial includes unlimited blocks and pages, you can create project overviews, timelines, kanban boards, and more. All for free.

Make sure to read my list of 32 free Notion templates.

It also includes up to 5 total guest collaborators in your space. When you’re ready to expand beyond that, it only costs $5/month.

Compare that to Monday’s monthly price of $24 and Notion is cheaper for individuals.

But for teams looking to manage complex projects then Monday is the better choice.

Read my full review of ClickUp and my comprehensive ClickUp alternatives post.

Like Notion, ClickUp is a technology start-up based in California.

Notion’s headquarters is in San Francisco, while ClickUp’s is now located in San Diego.

Both ClickUp and Notion offer solid free plans that are free forever. But there are some key differences.

Notion gives free users access to all features. Notion also allows guest access with up to 5 people on the free plan.

ClickUp reserves some features for paying users, like Unlimited Integrations and Dashboards.

Adding guests to your ClickUp account is also only available on a paid plan.

You can easily intake requests with Asana forms to avoid receiving requests via unorganized channels like Slack or email.

Asana also supports Calendar and Gantt chart modes so you can visually show your project plan over time.

Asana comes with 100’s of integrations, whereas Notion only has a few but you can customize your own with the Notion API.

Asana is more simple to use than Notion only because Notion can do so many more things.

Notion can be a repository for your entire company’s knowledge. It can track projects, tasks, due dates, and more.

Quite a difference in Notion’s favor.

But if you wan to use Notion in a team setting then it costs $10/month/user.

The company I work for now, Loom, has an Enterprise Notion account which is honestly awesome.

Our entire company uses Notion as a repository of company and team information.

We’re heavy users of our product, which is a tool to record your screen and camera.

So many of our Looms start with a Notion doc to have both a written and audio record of what you wanted to say.

As a result we have less synchronous meetings.

Skip the Zoom and Record a Loom instead.

Read my full review of Evernote.

Notion used to give current Evernote users $5 in credit to import their Evernotes into Notion, but it seems like they no longer offer that. It was a nice way to entice users over, but by now Notion’s product has matured enough to compete without the incentive.

Let’s compare features, their free trials, and then wrap up with why Notion is better.

Notion is a productivity solution, Evernote is a note-taking app. That right there tells you some of the main differences. Here’s a overview of the main features of Notion and Evernote.

Both Notion and Evernote are free to use. Notion’s free trial lets you create an unlimited number of blocks. A block in Notion is a piece of content; it could be an image, a paragraph, or a row in a table.

In my experience Evernote gates a lot of their main features behind their paid plans. So you can take notes and create folders, but it’ll pester you to upgrade to a paid plan before you can use it to its full potential.

On the other hand, Notion gives you access to all it’s core features, including unlimited blocks. The main limitation is the number of guests that are allowed to collaborate in your space, and file uploads. Notions' Pro plan has unlimited file uploads (free plan is limited to 5mb for each file uploaded). The Pro plan also has version history, whereas the free plan does not.

Why Notion Is Better Than Evernote

Notion is so much more than a note-taking app. You can build an all-encompassing productivity solution for your life within it. I’ve written before about how I built a Notion habit tracker, and I still use it to track my workouts, catalog my journal, and aggregate my writing. I’m writing this blog post in Notion right now.

I’ve used Evernote in the past and found it cumbersome. Evernote also limits your monthly uploads to 60mb, and your notes have a maximum size of 25mb. You can only sync 2 devices to one account, any more and you have to pay.

Notion lets you add and sync as many devices as you want. They even incentivize you to try their other apps, giving you free credit by downloading a mobile app and sharing content from within the app.

Whereas Evernote is note-taking software, Trello is task management software. Trello is terrible for taking notes, but it’s great for organizing your tasks and to-dos in one centralized place. However, Trello is strictly limited to tasks. It can contain a workout calendar, to-do list, and serve as project management software, but it can’t contain your writing, journal, or a database with pictures and references to other objects.

I’ve used Trello at work as a Kanban board for me and my team. It’s easy to create swim-lanes for To-Do, Doing, and Done. I can easily create new tasks for my team and setup automation rules to tag them in it. It helps me visualize what my team is working on, and I can reprioritize work as needed.

Both Notion and Trello are free to start. Trello lets you create unlimited personal boards, with unlimited cards and lists. You’re limited to 10mb per file attachment, which is not unreasonable. You can add simple automations and one power-up, which is essentially an add-on or integration with other providers.

I’ve covered Notion’s free trial before so I won’t rehash it in detail here, but you’re now able to store an unlimited number of blocks and pages.

Notion’s personal plan starts at $5/month, or $48/year if you pay up-front. Notion is half the cost of Trello, and way more powerful.

Creating A Trello Board In Notion

Creating a Trello board in Notion is super easy since Notion’s team has done all the work for you. All you need to do is create a project, search for Task List, and you’ll get this. 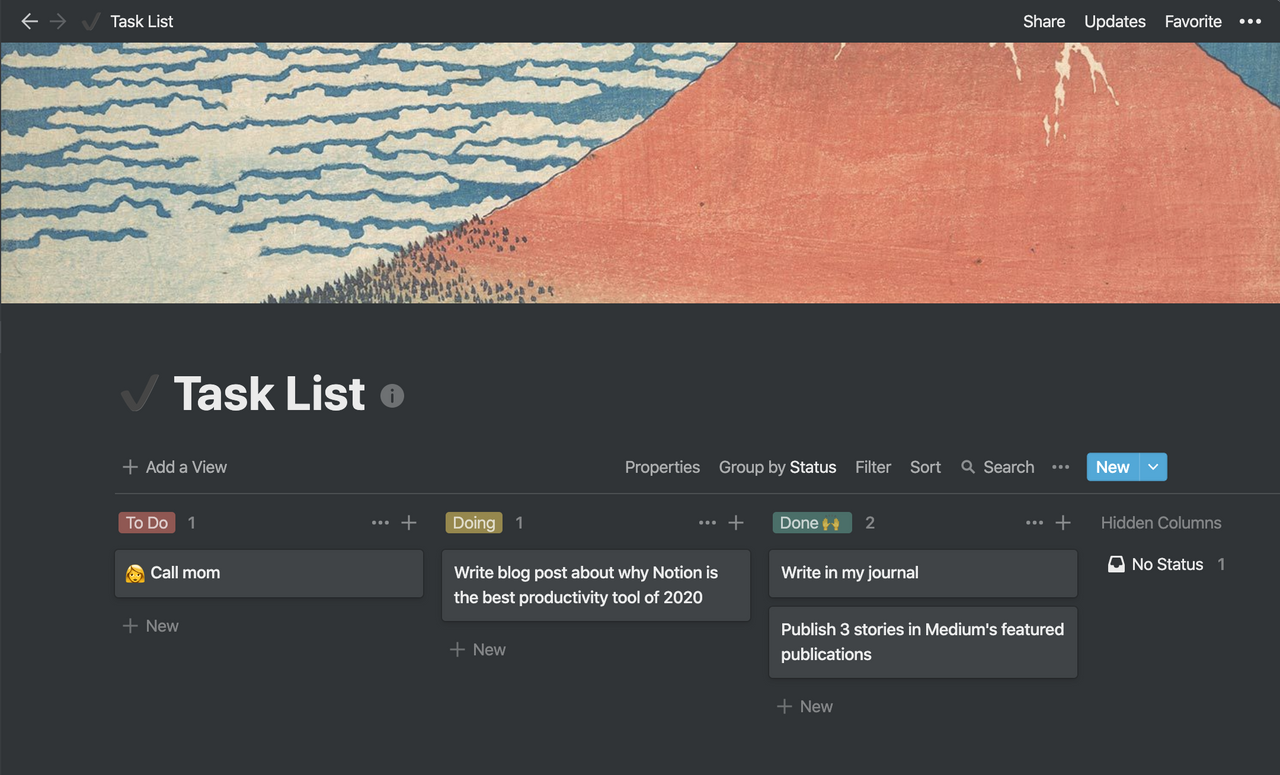 Simple, right? Trello is strictly web-based whereas Notion has cross-device apps and works on the web. Some may prefer working within a browser instead of a standalone app. Personally I prefer having an app because it’s easier to get distracted in a browser. I can open a new tab and navigate to reddit in less than a second, so I’d rather not have that temptation at all by working in a separate application.

Why Notion is Better than Trello

Can Trello track your workouts in a calendar? Yes.

Can you reference those daily workouts on other boards? No.

Can you write your next novel in Trello? No. Not that I would recommend writing an entirely novel in Notion, but you could. More power to you.

Trello’s features are mostly available within Notion at this point.

This is the closest comparison because Notion and Airtable are very similar. They both have apps and they both work in the browser.

Their aesthetics are very different. Airtable is all colors, and Notion is black and white.

My main complaint with Airtable is that it’s confusing. I was able to get up and running in Notion super-fast with their stock templates doing all the heavy lifting for me.

Airtable also has preloaded templates, I just also found them cumbersome. Switching between views is confusing and the tab system at the top, while reminiscent of a web browser, just does not work for me.

Airtable also gates many of their premium features under their paid plan, whereas Notion gives you everything during the free trial.

Why Notion Is Better Than Airtable

I’ve personally found Notion’s in-app onboarding experience to be cleaner, more intuitive, and easier to get started with. Each tool has a learning curve that will take some time to get used to, but I found Notion’s to be simpler.

The Best Productivity App of 2021

Notion beats Monday, Evernote, Trello, ClickUp, and Airtable across the board. Evernote and Trello are very limited apps, good at one specific purpose and terrible at everything else. Airtable is Notion’s closest competitor in the scope of this article, but it still falls short. On pricing alone Notion is half the cost of Airtable, before you factor in all free credit Notion gives you for completing certain tasks.

Give Notion a shot today. The built-in templates are great, and there are tons of other articles on how to setup Notion just the way you want it.

Best of all, Notion doesn’t have an affiliate program. I’m not getting paid to promote Notion. I’m just a guy writing a blog post in a hotel room about his favorite productivity app.