Building an organizational system for my writing enabled me to publish new content every day this month and helped build a huge backlog of ideas and drafts for future months.

I’ve used a Kanban board at work to manage my priorities and tasks, so it only made sense to build one for my writing too.

You’ll learn what Kanban is, it’s history, and how to build a Kanban board in Notion.

I guarantee you’ve seen a Kanban board before, Trello is a great example, but did you know the idea originated in Japan by Toyota?

Literally translated, Kanban means billboard or signboard. It was developed for just-in-time manufacturing at Toyota. Kanban production is based on real customer demand to produce goods in the factory. Before, goods were produced en-mass and pushed to market without considering the demand for them.

Kanban has also been adopted by software development teams around the world as the Lean methodology.

The core idea of Kanban is to minimize waste without sacrificing productivity. It can be adapted to almost anything, in this case, it’s a powerful tool to organize your writing.

How you can apply it to your writing

There’s no need to get crazy and reinvent the wheel here. Let’s stick with 3 swimlanes:

Ideas are just that, very basic ideas of things you want to write about. I create a new task for each idea I have, that way if I want to develop it I can start writing.

Drafts are ideas that have become half-formed posts. A draft is something you have started but not finished. It needs more polishing.

Done is self-explanatory. Get as much done as possible and you’re well on track to being a successful writer.

I use a productivity tool called Notion to build my writing Kanban board. I like using Notion for a few reasons:

Build a Kanban Board with Notion

Want to dive right in? 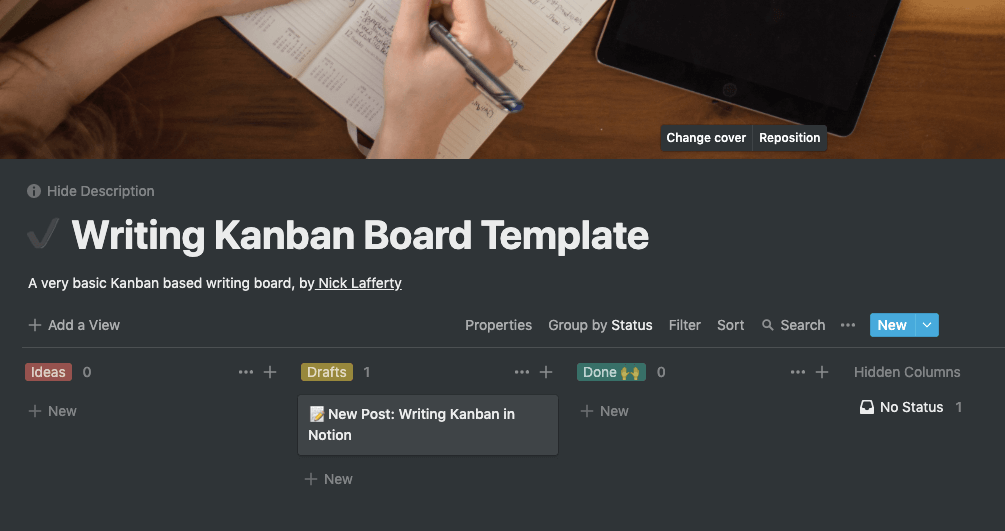 I prefer to stick with the order I listed above.

But feel free to name them whatever works best for you. I add two properties to stories in my Done board:

This tracks where I’ve been published, and what day they were published on. You can also create properties for Genre, Theme, or anything else you want. They can be dropdowns, checklists, numbers, almost anything.

Now that your board is set up, take some time to fill in your Idea board. Take 10 minutes and go through a brainstorming session, writing down whatever comes to mind. Don’t edit anything. No idea is terrible.

If you have any current drafts, bring them in.

That’s it! Starting a Kanban board is super easy, either in Notion, Trello, Asana, or any other major tool.

But you have to start using it to see the real value.

Share any organizational, kanban, or Notion tips in the comments. I’d love to see them!

And if you’ve tried Notion and it’s not for you then checkout my list of Notion alternatives.