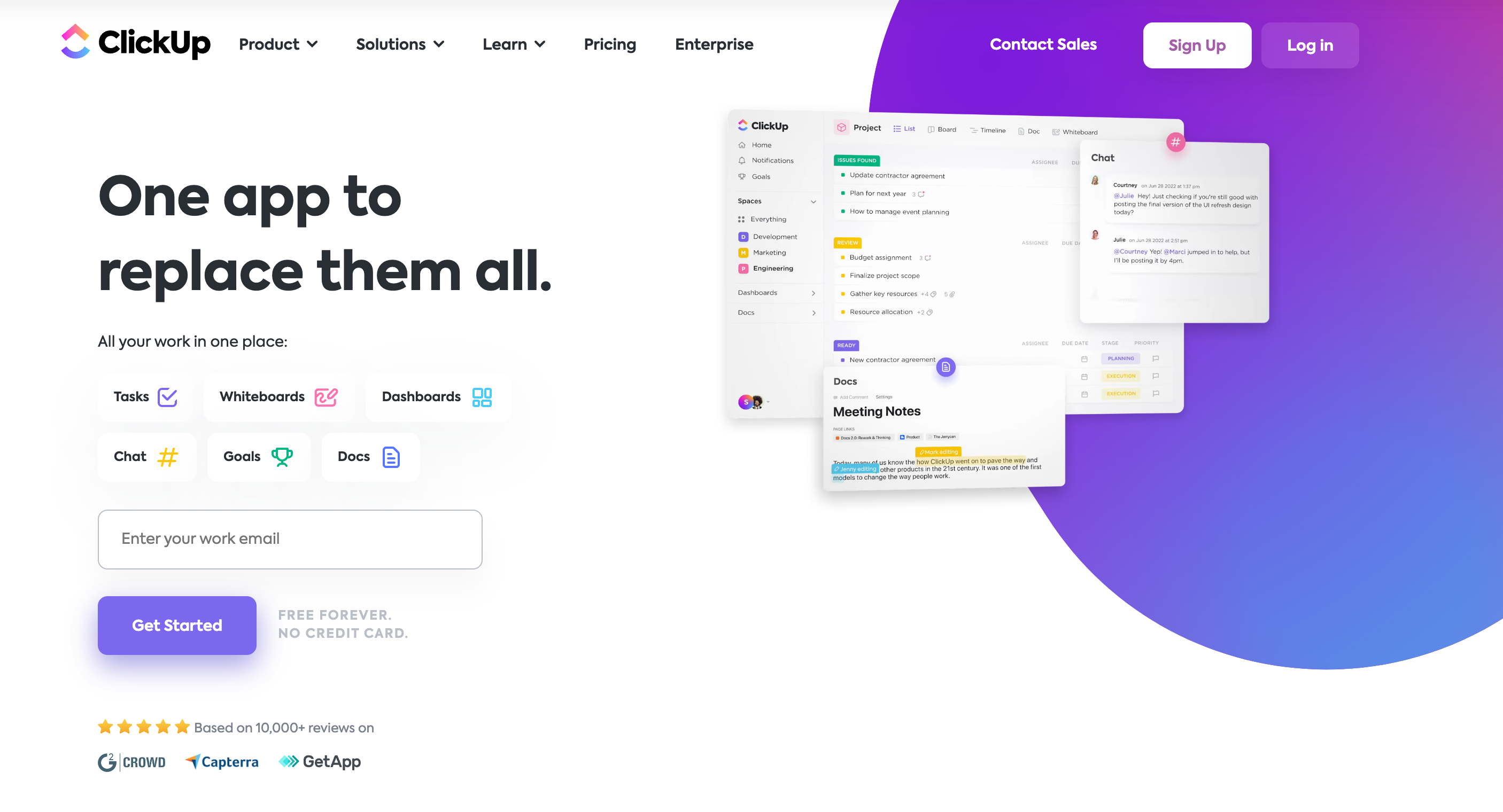 ClickUp is more than just a project management tool. ClickUp can track your tasks, goals, and OKRs, work documents, and more.

ClickUp is trying to become one app that can replace all other apps.

But you’re looking for alternatives to ClickUp, and that’s what I’m going to give you.

Why Look at Clickup Alternatives?

As software has eaten the world each category has become increasingly competitive. Project management tools, which I think is ClickUp’s primary function, is hyper competitive.

Notion is now valued at over $10 billion.

This is a crowded and successful space, so if you’re not happy with one tool then there are other options for you.

So let’s get into them.

monday.com is my #1 choice for ClickUp alternatives.

They offer everything ClickUp does and in some cases do it better.

monday.com is purpose built for team collaboration in the workplace, so if you’re using ClickUp with your team now then I’d strongly recommend giving monday.com a look.

Make sure to check out my complete clickup vs monday post for a deeper dive.

The biggest con for monday.com is their pricing structure, which I discuss in more detail in the next section.

The biggest pro for monday.com is honestly the maturity of their tool. They’ve been in the project management space for a long time, formerly they were called DaPulse (and I agree with them that monday.com is the better name). Feature maturity means a smother user experience compared to a startup like ClickUp.

ClickUp’s biggest con is I personally find their UI confusing and not as intuitive. It has improved over the years, and now when you register for ClickUp they have a short video tutorial series that gets you over the initial hurdle.

Kudos to the ClickUp team for addressing the initial user onboarding flow in a quick and easy way.

ClickUp’s biggest pro for me is pricing. It’s much cheaper to get into the ClickUp ecosystem than it is for monday.com.

ClickUp has no minimum user amount, and actually allows an unlimited amount of users to access your workspace.

ClickUp’s pricing is more favorable, starting at $10/month. But for either tool to be effective you need to be working with a team, so for 3 users both ClickUp and Monday are comparably priced.

I’m a price-sensitive buyer, and I think most folks are, so pricing is a huge consideration for me when I’m looking at new tools.

Some of monday.com’s best features are locked behind their Standard plan, which costs $36/month.

Honestly it seems like monday’s Basic plan ($30/month) exists to anchor your to a specific price and push you towards their slightly more expensive Standard plan ($36/month).

For only 6 more bucks you get access to so many more things!

On pricing alone I prefer ClickUp, but overall I think monday.com is better for teams. 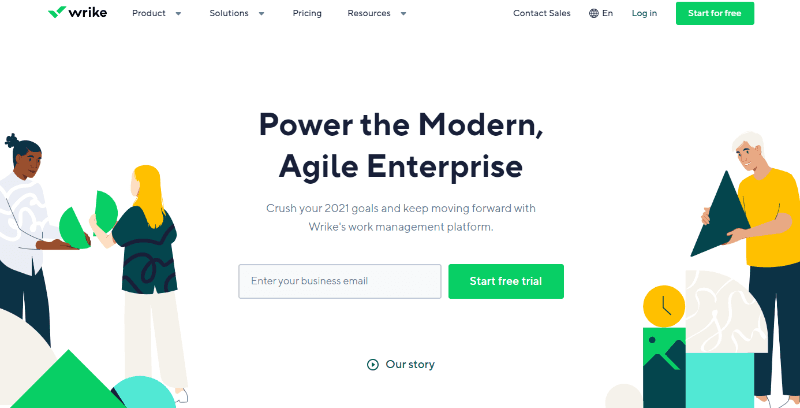 Wrike is a project management tool custom built for the Enterprise.

That isn’t to say small teams or professionals can’t use Wrike, they definitely can, but Wrike’s main audience is larger companies.

I consulted for a ~50 person company last year that used Wrike to track tasks across the entire company and it did the job well.

Wrike was acquired by digital workspace giant Citrix for $2.25 billion. At the time of acquisition Wrike had about $140 million in annual recurring revenue(ARR), which is no small feat for a software company to achieve.

I’ll walk you through Wrike’s features and a cost comparison to ClickUp.

Check out my full Wrike review for more info. 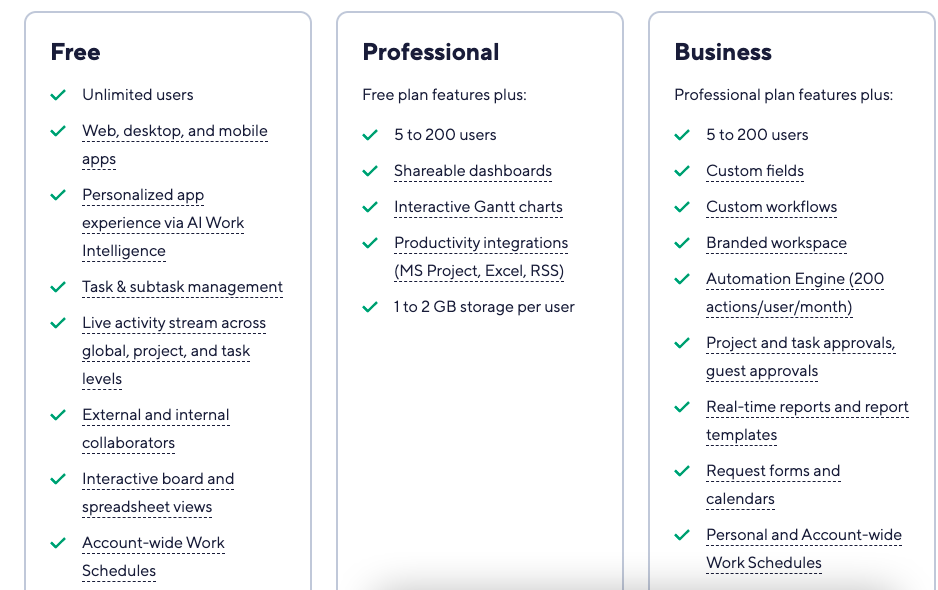 Frankly Wrike is missing a lot of features in it’s paid plan that ClickUp offers for free.

Some of Wrike’s missing features compared to ClickUp are:

Perhaps that’s a result of the Citrix acquisition, or a nod to Wrike’s enterprise focus, since those types of companies tend not to value a freemium model very much.

The difference in growth models for product-lead growth(PLG) companies compared to sales-lead companies is worth another post, but for now my assumption that Wrike is sales-lead rings true in their free feature list.

If free features are what you’re after then you’re better served by ClickUp.

Priced affordably, Wrike starts at $9.80/month per user for their Professional plan.

If you want more business features, like time tracking, custom fields, automation, task approvals, and a Salesforce integration, then you need to upgrade to their Business plan ($24.80/user/month).

In comparison, ClickUp’s business plan is cheaper at $19/month for many similar features.

Both Wrike and ClickUp offer free plans so you can get started, but ClickUp’s free plan includes more features than Wrike does.

Asana was founded in 2008, which seems like forever ago in today’s land of hot silicon valley startups.

But Asana is still no slouch and it’s worth considering.

Several companies I’ve worked at have used Asana in both a free and paid capacity.

The content editor at my last job was a massive Asana fan, and there are even dedicated Youtube videos to Asana tips and tricks.

At it’s core Asana is more than a simple kanban board, it’s a project management tool that makes it easy to manage projects and tasks across a team, whether fully remote, hybrid, or in the office. 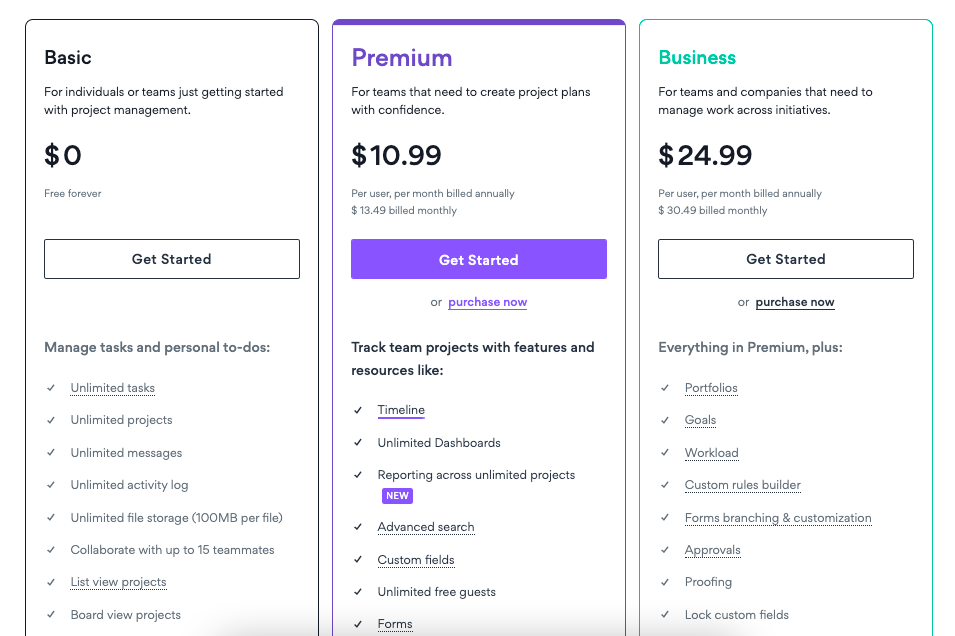 I’ve used both the free and paid versions of Asana. The paid version isn’t cheap, starting at $13.50/user/month, or $11/month per user paid annually.

The paid version is where Asana really shines because it unlocks the full workflow I described in the last section.

In my experience, having an intake form for requests is absolutely critical to keeping project information in one place.

Kicking off a project with only a slack message of basic info sounds like a project managers nightmare.

But Asana’s strict focus on projects and deadlines means it stays out of your way as you work. Sometimes I feel like ClickUp is trying to do too many things that could ultimately distract you or your team.

For specific use cases Asana really shines, but ClickUp has a more comprehensive solution.

Smartsheet was founded in 2005 by Mark Mader and Brent Frei, which makes it older than Asana.

Smartsheet is a publicly traded company with a stock price of $63 as of January 2022 and they last reported annual revenue of $385 million, which makes them larger than Wrike.

They have over 2,000 employees and are headquartered in Bellevue, Washington.

The Smartsheet interface was completely redesigned in 2010, and afterwards the company grew 100% each year for four consecutive years, which is frankly an amazing stat.

But is Smartsheet worth using compared to ClickUp?

Smartsheet, like Wrike, is an enterprise focused company. How do I know that?

This ROI stat with a case study download link is how. That is a stat aimed at organizations looking to implement a wall-to-wall (across every employee) solution.

Smartsheet also doesn’t have a free plan, their cheapest plan is $7/user/month after the free 30 day trial.

Here’s a small list of ClickUp features missing from Smartsheet:

Smartsheet started a glorified spreadsheet and has since evolved into a more complex product. But at it’s core Smartsheet still excels in spreadsheet-like tasks, whereas ClickUp is a broader product.

Smartsheet is deep into one feature set and ClickUp is wide across multiple features.

If you’re part of a large Enterprise looking to implement a tool across your entire company, one that has proven to work for 90% of the Fortune 100, then Smartsheet is worth your time.

If you’re a small scrappy startup then I’d consider ClickUp instead. 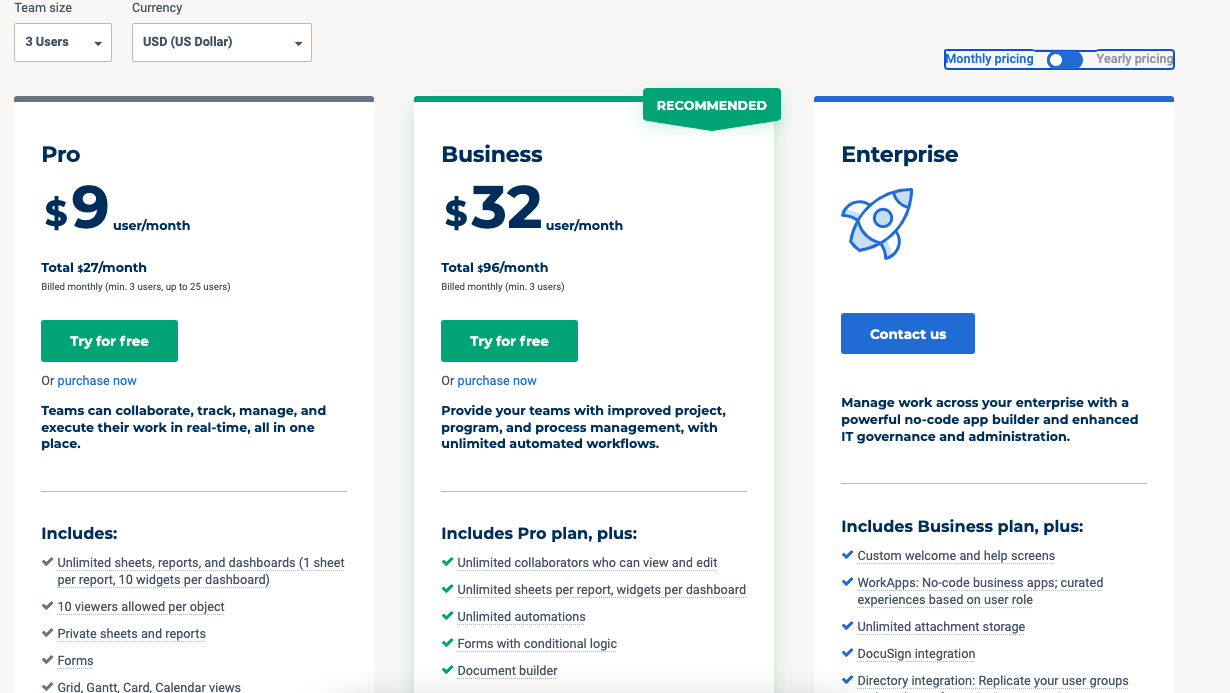 First, Smartsheet doesn’t have a free plan and ClickUp does.

Second, Smartsheet also locks you into paying for 3 users at a minimum, like monday.com, which makes their cheapest plan is $27/month.

So ClickUp has a better free plan, has a cheaper price floor, and gives you more features for your money.

Notion is one of the best productivity tools I’ve ever used. Notion provides flexibility to create documents, workspaces, and internal documentation however you want.

Plus Notion lets you natively embed a Loom in them, which is really handy for including a quick video summary at the top of your document (disclaimer: I work for Loom).

But no tool is perfect and Notion isn’t for everyone.

ClickUp has some features that Notion does not and I’ll cover them below.

Notion isn’t built strictly for task management like ClickUp is.

ClickUp has better project management tracking tools like Gantt charts and Notion does not.

A lack of Gantt charts means Notion doesn’t have automatic progress tracking capabilities. Load a ClickUp dashboard and you’ll get an instant, automatically updated view of how your project is going.

ClickUp is also more visually colorful than Notion is, if that’s your thing. Some prefer the minimalistic and sleek style of Notion, but if colors are your jam then ClickUp could be your preference.

Don’t miss my post on Notion alternatives to see the other side of this comparison.

ClickUp is more expensive per month than Notion.

Notion gives every startup $1,000 in free credits to get started which I think is really cool.

Of course there’s a business reason for that. Notion is betting that by having their tool ingrained in a startup’s operations from the beginning that the startup will eventually grow, scale, and start paying Notion in the long term.

monday.com is my favorite ClickUp alternative.

Notion is the best free alternative to ClickUp, but if you’re part of a larger team that manages long, complex projects, then monday is the better pick.

You can’t really go wrong with any of the tools in this list. They all have similar features and pricing, it just comes down to what features you need to get the job done.